In conversation with Salam Watandar, he described his deplorable experience of irregular migration with a sad face. Shamsullah Ahmadzai, who used to teach English at a public school, migrated two months ago due to poor economic conditions and social injustice. But, he knew little about the troubles ahead.

“The thieves attacked us like wild wolves, fought with us and were shouting in Persian that ‘these belongings are ours’”, he said.

The dejected Afghan migrant said in an interview with Salam Watandar about his migration to Turkey.

“In this while, we fled to the Turkish border gate, but the Turkish soldiers shot at us and we returned. That’s when we got caught by thieves, they beat us and demanded us to call back friends and family members in Afghanistan to transfer money to them. I was pressured and compelled to pay them $ 200 to let me go.”

He added the Afghan migrants were beaten and forced to work at checkpoints and to build watchtowers. “Even at work, they beat us and fed us only little food, just enough to keep us alive. They took our cloths and cell phone and beat us so badly that we were covered in blood.”

Meanwhile, members of Shamsullah Ahmadzai’s family say they are happy that Shamsullah has returned home alive. But, they are worried that the current crisis in the country and the spread of poverty might lead him to this path again.

Mumtaz Ahmadzai, Shamsullah Ahmadzai’s brother, said that irregular migration has caused psychological damage to his brother. “I am happy that my brother came back, we were very worried about him. He is not in good health and has mental problems. We are worried that he might try to go to Europe again because he is unemployed now and he has lost his job.”

Shamsullah Ahmadzai is not alone to face such situation. Many other young people have suffered the same fate.

However, officials from the Ministry of Refugees and Returnees say for those people who travel to other countries without legal documents they have various programs that are broadcast on social media and through radio networks.

Sayed Abdul Basit Ansari, media adviser at the ministry, told Salam Watandar that there are public awareness programs that inform people about the dangers of irregular migration, and in some cases prevent young people from migrating irregularly.

“The Ministry has various programs in the field of public awareness, and we are trying to raise the level of awareness of our compatriots,” added the media adviser to the Ministry of Refugees and Returnees.

“We aim to create a situation in which our countrymen, especially our young generation who decide to migrate irregularly, are aware and know that it has bad and negative consequences. One of such troubles is the psychological problems that come their way during irregular migration”, he added.

Shamsullah Ahmadzai called on the government to provide jobs for young people in the country so that young people like him do not migrate irregularly due to poverty and economic problems. 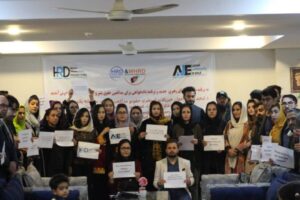